As much as I am missing my baby during the week, I am really enjoying my time with him, whether in the evenings or on the weekends. 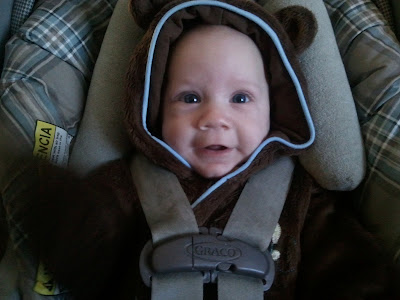 Knock on wood, but he seems to have gotten most of his fussiness out in those first few weeks. Unless he feels I’m being a little slow with the bottle, in which case he will let his displeasure be known.

Michael is smiling and blowing raspberries. He has many different vocalizations, from “ahs” to “oohs”. He laughs and belly laughs — especially during preparations for bath time when I’m blowing zerbets on his tummy. He watches his sisters’ antics, and he is especially excited when they make a point of fussing over him. He kicks and smiles to beat the band when Flora or Kate pay him some attention. Which, of course, means they pay him even more attention. So he’s smart, too!

He is starting to push with his feet and arch his back when he’s laying down; and when he’s on his belly, he can pick up his head and push with his arms. He’ll be rolling over soon, I expect. (Soon being in the next, oh, month or so. I’m not in a hurry, like I used to be.) He can’t sit up yet, but he sure tries. He looks like he’s doing baby crunches when he does — sounds like it too.

He is grasping things, usually my hair, though not holding onto them yet…except for my hair. 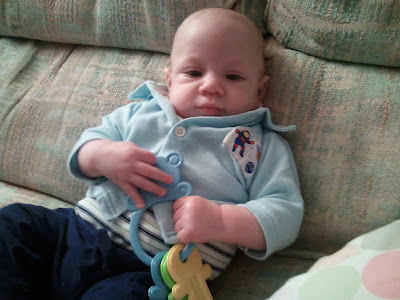 He is (shhhhh) sleeping. His napping is still a little erratic, although he will take two solid ones, usually. At night, he pretty much goes from about 8:30 p.m. to 6 a.m. I wish he would sleep a little later (and sometimes he does) only because I’m usually trying to get ready for work at 6 a.m.

The tricky thing lately is his evening catnap. I’m trying to end it, because ideally — and we all know how ideal babies like to be — he will start going to bed between 7 and 7:30. Now, he’ll drift off anytime between when I pick him up and, say, 6 or 6:30 p.m. Or he’ll snooze during his 7 p.m bottle, drawing out feeding time and bedtime up to an hour and a half. This is primarily inconvenient because I’ve other children to bathe and put to bed.

I’m not pushing it too hard yet, but I am hoping that by waking him during his evening catnap — or, better, not letting him catnap at all — he will start to go to bed earlier. I’m going to try it this week. I’m not ready to go hardcore on an evening schedule with him. I think by six months, I’ll start putting him to bed while he’s sleepy but still awake.

He’s a binky baby, which is fine with me; Kate was too. He has discovered his fingers and his hands, one of which he can get all the way in his mouth! 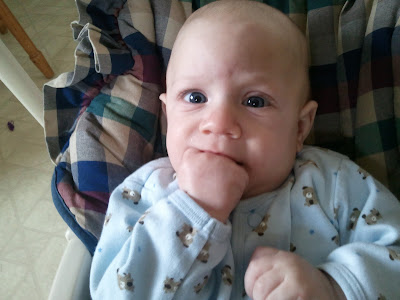 And he’s just cute as all get-out. I take a picture almost every day with my phone. Just so I can see this face any time I want: 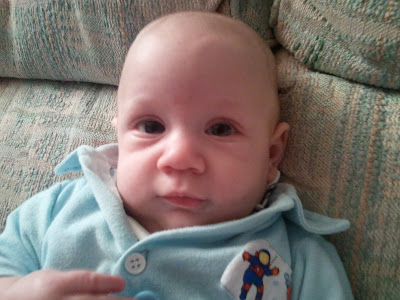 6 thoughts on “Let’s Hear It for The Boy”