What shall I tackle next? The End of Men? Are “men finished“? What about men and women moving between spheres? Are women the new men?

As you may or may not know, organic peanut butter tends to separate, with the oil coming up to the top. Before you use it, you have to stir it and reincorporate the oil.

Dan hates doing that. I will admit, the process can be messy when opening a new jar. Oil can slop out and run down the sides; it’s oily, messy, sometimes sticky, a PITA.

But it’s not exactly the end of the world.

Usually, once mixed together and refrigerated, the peanut butter stays mixed.

So I keep buying organic PB. And Dan keeps bitching about it.

Some things never do change.

Although, I did buy this last week for a temporary reprieve: 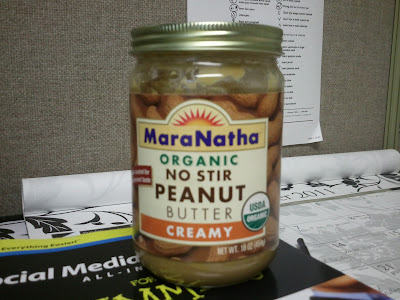 What’s your favorite controversy this week?

When I picked her up, she said, “Why do I have to be in aftercare?”

Although she was not whinging about it, she really was genuinely curious, it broke my heart a little bit.

I simply explained that both Daddy and I worked, and we needed someplace for her to stay until I could pick her up and take her home.

Now, as seen from the last two days, this is a complicated question. Actually, I take that back. My FEELINGS about having to work full time are complicated. But it does boil down to simple economics and the need for affordable health care. So.

And as I spoke about this to my daughter, I realized something.

Women have not been in the American workplace full time, in our current numbers, EVER in the history of work. Or America. Or of women for that matter. As a matter of fact, 100 years ago, you’d be hard pressed to find women working outside of the home.

Now, it was done; according to the 1870 US Census, women made up about 15 percent of the American workforce. Even as early as the late, late 1800s, women were working outside the home as teachers and nurses, in factories, even as ship riggers and stock herders.

We are all (vaguely at least) familiar with “Rosie the Riveter”, and the way women streamed to work outside of the home — mostly because men were off fighting and dying in World War II. (A lot of women joined the military in WWII, also, although they were not on the battlefield.)

In the 1970s, the real workplace revolution began. Women flooded college and university campuses; they flooded the workplace; and they weren’t looking for “traditionally” female occupations. They wanted to be doctors and lawyers, business owners, CEOs, copy writers, accountants, engineers, architects…. you get the picture.

And the workplace was less than welcoming. Sexual discrimination, sexual harassment, equal work for equal pay, access to promotion, and so on, these are battles women are still fighting. Today. In the 21st century.

It’s gotten better. However, I think it could do better, for everyone, not just for mothers, fathers, women. For all workers, blue collar, pink collar, white collar. And it’s not necessary to involve government. Employers can decide (or not decide) to do what ever they like, as long as they follow the law.

Part of the brou-ha-ha is, as my husband pointed out last night, employers don’t have to change. That is absolutely, 100% accurate. If no one demands, asks, explores the changes and possibilities, employers can do what they want.

But if employees start asking about changes, employers may start listening. If we reason with them, they may come to the table to negotiate.

I’m not bitching about my situation. I’m talking about it. I’m not making demands or castigating my company as a terrible place to work. I’ve always said it’s a great place. I wouldn’t say differently.

Pumping breast milk at work isn’t an entitlement. It’s so a woman can feed her child the best food for her child. I don’t think an employer should be able to de facto say: you have to give your child formula. Evolution, not entitlement.

Telecommuting is evolution. The availability of flextime or part time is evolution. I’m not over here stomping my feet like a child because “it’s not fair!” I’m discussing options that I bet I am not alone in wanting to see in the American workplace. If you like the status quo, that is fine.