“Forgot it was picture day today. My child’s in his uniform with unwashed hair. Mother of the year!”

“Daughter on museum field trip clomping around in her winter boots. How do other parents know to pack a change of shoes? Mother of the Year.”

“Letting the 3yo run around our backyard in his gutchies. I’m either the best mom or the worst mom ever. #MOTY”

We all have these ‘mother of the year’ moments, times when we’re too tired to fight the fight, times when we feel we’re letting our children down — or scarring them for life.

Let me set the scene. It is a weekday evening. I work outside the home full-time, and I have three children at home, so weekday evenings are not my favorite. It’s all a big sprint toward bedtime as far as I’m concerned. At this time, my children are 7, 5, and 1.

Dinner that night is leftovers, my favorite dinner of the week. The 1-year-old is already strapped in his high chair. I keep asking the 5-year-old what she wants for dinner, and she keeps arguing with me about I don’t even remember what. (The 7-year-old is conspicuously absent from this story.)

My middle child continues to get increasingly agitated. I think it’s because I won’t cook her a grilled cheese sandwich. “Look, kiddo,” I say, “it’s leftover night. Pick something and I’ll warm it up.”

“I’m going to call the police,” she informs me angrily.

I’m going to call and tell them you are being a mean mommy.”

“Kate, I am not being mean to you. Just because I’m not cooking something new, that’s not being a mean mommy.”

Kate stomps out of the room, and stomps right back in brandishing the cordless phone.

* exhale noisily * “Whatever.” I don’t want to deal with this nonsense.

She doesn’t even know the number!

“Kate, you can’t call the police on me.”

“Please, sit down! What do you want for dinner?”

She looks me triumphantly in the face. *beep – beep beep*

Mother of the Year awards actually do exist. For example, the Albany Tulip Festival is giving out its 16th annual award this year. They are “looking for moms who have proven a commitment to their family and their community.” Unless they consider Twitter and Facebook communities, I am not eligible for this award. American Mothers gives out a national Mother of the Year award, plus an award for each state. Maybe I should ask to be nominated.

I would like to think that my children would nominate me for Mother of the Year. I’m their only mother, so I have that going for me. And some days, they think I’m a great mom. I bake cookies, I play board games, I read with them. When I get to say yes to my now 4-year-old son, he throws his little arms around my neck and declares, “You are the best mommy in the world.”

And in that moment, I am. I am the best mother EVER.

Although I had promptly grabbed the phone away from Kate and hung it up, a police officer did come to the house. 9-1-1 protocol is to respond to every 9-1-1 call. A very surprised Kate assured him that everything was fine. “She called you,” I explained to the amused cop, “because I was being a mean mommy.” The officer regarded my daughter with a twinkle in his eye. “I don’t know,” he said. “Santa may need to hear about this.”

Later, as I was trying to explain the gravity of the situation, Kate became very distraught. “But I didn’t even talk to anyone!” she said.

“That number is for serious emergencies,” I explained. “The people on the other end of the phone didn’t know why the call was cut off.

“A bad person could’ve grabbed it and hung it up. Or if there was a fire, it could’ve been cut off. They had to send someone to make sure we were safe.” Poor Kate broke into sobs. As far as I was concerned, her punishment was those tears.

ETA: I want to emphatically and enthusiastically encourage you all to view ALL the Pittsburgh videos, starting with the first. Watch the show all the way through. Heck, watch other cities’ shows!

Each story stands on its own. But together, they are amplified. You will go on a journey through motherhood, highs and lows, tears and laughter. Participating was an honor and a joy. Getting to see it again, and read the recaps, has been so much fun.

If you do take the time to watch them all, and/or another city, tell me your favorite!

Last night, as I was getting ready for the Listen to Your Mother read-through and cast party, I said to Dan, “I’m kinda nervous.”

I can’t attest to the fact that he rolled his eyes. “Oh, goodness, yes, people! I hate people.”

My husband gave me a serious look. “That’s progress for you.”

I cannot express what an amazing job Jennifer, Amanda, and Stephanie have done in selecting a series of stories, a group of voices, that just GO together. Every essay is vital to the whole.

And this sharing of women’s voices, of mother’s voices, is so important. In this, the era of mom blogs and Facebook status updates, it may not seem that way. But trust me, Listen to Your Mother does something different.

More than capturing the fact that motherhood isn’t all rainbows and kitties, LTYM tells a deeper story. In each essay, is your story, or your wife’s story, or another mother’s story. There will be a moment, a turn of phrase, an image, that will strike you, that will have you nodding along. “I know that,” you’ll think. “I’ve seen that.”

I can’t tell you how humbling it was to listen to the other women I’m going to be on stage with last night. I was blown away by the power of their words. Every story is unique, and it’s wrapped around a universal nugget that is at the heart of motherhood.

If you’re still on the fence about coming to the show, you should get off the fence and fast. Only about 60 tickets remain for Pittsburgh’s inaugural Listen To Your Mother show. 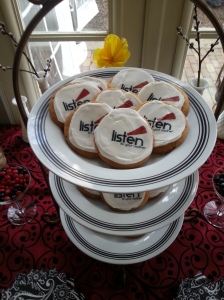 I don’t know if they all liked me. I’m pretty sure they liked my story. When we had all read, I wanted to wrap all of my castmates up in a big hug. It’s going to be a blessing to spend time with these women. I can’t ask for much more.

I have been dying to tell you this for a week. For more than a week! I got the email last Saturday at 10:30 pm.

They swore me to secrecy.

*ahem* Are you ready? Are you sitting down?

I AM IN THE PITTSBURGH LISTEN TO YOUR MOTHER SHOW!

Oh, it’s such a relief to be able to share that. Whew.

More details, and the cast list here. Aside from our director/producers, I’ve also met the lovely Britt Reints, who blogs at In Pursuit of Happiness. The show is Friday May 8. We are raising money for and awareness of the Woman’s Center and Shelter of Greater Pittsburgh.

I do hope you will come see me read my essay. It’s not a story I’ve told publicly before.

I can’t wait to meet the rest of the cast, and hear their stories too.

I have a lot of admiration for my friend Kim. She participated in the Chicago presentation of Listen to Your Mother. Along with being a professional and a mother, she is a playwright. In this verbal essay, she says a lot of things that, in my experience, work-outside-the-home moms hesitate to admit.

I have said this before, but in this context it bears repeating. I don’t just work to earn money. I work so that I leave my house. I work so that I am not at home, spending all my time with my children. I *love* my children, and I love being around them (most of the time). But I also feel like my work life makes me appreciate my home life more.

What Kim has to say is poignant and honest, and oh, when she reaches the end of her piece. Oh. My heart for her. (Aside to Kim: did you know that was going to happen?)

Please go watch it before you finish reading this.

I, too, like being good at what I do. It’s one of the (many many) reasons I work. I haven’t been called the nanny’s name (my children are a little older than Kim’s, though), but there have been moments, often in the evening or on a Saturday, where I get a look from them. A mumbled comment when I tell them to clean their room, or that we won’t make it to the pool today because we have to do XYZ. “I wish Miss Nanny were here.” The implication being because Miss Nanny is more fun.

Miss Nanny is, sometimes, often, more fun. I get that, and I envy her that time that she has to be more fun with my children.

But. And but. I, too, am fun. And a parent. I have to do hard things. Set limits. Enforce consequences. Teach responsibility. Give baths and enforce bedtimes. Make sure homework gets done and soccer practice is attended.

Miss Nanny, for all the fabulous work she does do (she has to enforce chores every day, which ain’t easy) isn’t raising my children. She’s taking care of them during the hours that I go earn a paycheck. It’s definitely a trade-off. One that works well for my family.

I’m really happy that Kim got the laughs she got.

Anyway, I also have to say here that I would love to find a way to bring Listen To Your Mother to Pittsburgh. Stay tuned. And in the meantime, check out the other Chicago performances.

Red Pen Mama by http://redpenmamapgh.com is licensed under a Creative Commons Attribution-NonCommercial-ShareAlike 3.0 Unported License.
Based on a work at redpenmamapgh.com.
Back to top
Loading Comments...