The five-day trip to Seven Springs was a nice little getaway for the family. The kids had a really good time. Dan and I did, too, although the only downside to the trip was that Dan and I didn’t get to spend much time together. We split POD time, and between naptimes and bedtimes, one of us was usually at the place while the other was either out with the other kids or visiting other family.

Saturday night we had thought to go up to the Rib and Wing Fest (yes, I know, the irony of a vegetarian at a Rib and Wing Fest) to see Bill Deasy. And we did go, but since we also went up with my parents and the kids, we spent a little more time with the kids than watching Deasy. And then although my mom was going to stay at the place with the kids after bedtime, Dan was wiped out from a late Friday night (or should I say Saturday morning?), so stayed there, too. I went a’visiting since it was our last night.

Michael napped, and Michael slept through the night (except on Sunday, when he decided at 5:30 a.m. he wanted to sleep with/on me). That made a huge impact on the trip, the fact that Dan and I could really sleep (or, during naptime, take turns chilling). One morning, Flora even came in the room and got M out of the pack’n’play without waking Dan or me up! So when (if) we didn’t get adequate rest, it was our own fault. Of course, Thursday night I was so tired that since I was POD, I went to bed at 10 p.m. Whoo, vacation party time!

Let’s see. We swam, played mini-golf, and played games in the arcade. We had waffles and pancakes with my sister-in-law and the four boys. The children ate a lot of mac’n’cheese and french fries. Flora got WAY too tired, and had a couple of melt downs. (Yeah, Flora, my eldest child.) We took the family photo. All-in-all it was great to catch up and see everyone. Dan had two nights out, and I had two nights out. Everyone commented on how adorable M is (it’s true, he is).

The girls loved going to the pool, of course. M was ambivalent about it. He went in a couple of times, but was content to sit on the side of the pool with me and some snacks.

I don’t really like swimming with the kids. I’m not really crazy about swimming in general, so although I am able, it’s not something I do unless I have to. Thank goodness for swim lessons.

On Saturday, after the family photo and lunch, M went in for a nap, and I took the girls to the pool. They swam for nearly three hours straight. I sat in a lounge chair or on the side of the pool and watched them. My parents were on me a little bit about letting the girls go in the water alone, but I was keeping track of them. And, they weren’t really alone. When we go up to Seven Springs, we pretty much take over one of the pools. So Flora and Kate were in the pool with about a dozen or so of their cousins, with lots of adults watching.

I did not take many pictures. I’ll have to look around and steal some from Facebook or see what my mother emails to me. However, I did capture a little of the family photo chaos: 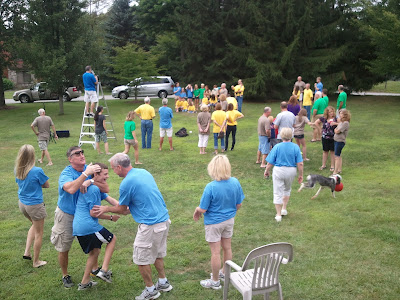 The photographer is up on the ladder. We’ve already taken the BIG family photo, and now he’s getting a shot of the people who were not in the picture we took 12 years ago. That included a couple of spouses (like Dan) and most of the kids, whom we refer to as the 3rd Generation.

Here’s Kate and Michael during a pause in the action, and Kate’s expression pretty much says, “Now what, mom??” But she, Flora, and Michael did very well during the photos, which took about an hour, hour and a half. Thank goodness, once more, for snacks, including (at the end) red velvet cupcakes for a birthday.

My sister traveled from North Carolina with her husband, her teenage stepdaughter, a friend of the stepdaugher, and two dogs. In a Honda Civic.

Her dogs are Boston terriers, and one of them, Buddy, is at least 15 years old. Maybe 18, I forget. And is literally on his last legs.

I cried when I said goodbye to him. I’m sure it was for the last time. He’s been a good dog, and he’s probably literally saved my sister when she has been in dark places. 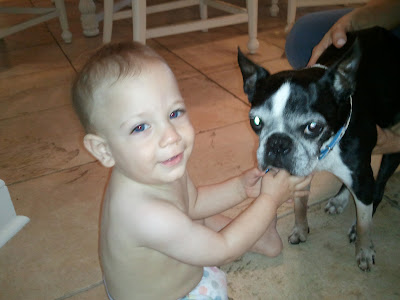 Did I mention the arcade? While there are a few video games and pinball machines, the arcade at Seven Springs is largely given over to games that award tickets (skee ball, Deal or No Deal, a game where you can torpedo boats). By the end of the day Friday, Flora had 2500 tickets, and Kate had 800. Mostly through pure luck — it didn’t cost nearly as much as you might think. One machine had a 1000 ticket space — and Flora hit it twice. Kate got lucky on a couple other machines, plus shot the rainbow boat.

I helped them “shop” before we left on Sunday. They didn’t do too terribly (meaning I steered them away from the worst of the plastic junk).

What do you like to do best on vacation?

One thought on “Random Thoughts: The Vacation Wrap-Up Edition”