1. I think the Great Bang Experiment of 2012 is coming to an end. Which will amuse my stylist to no end because I asked him for *months* for bangs. He refused until I showed him a picture, then said, “Oh, those will look good on you.” And they do. However, the combination I have going on now of bangs, glasses, and, occasionally contact lenses, isn’t working so well.

2. I’m occasionally wearing contact lenses again now that it’s summer-time weather. My eyes don’t really like them, but for short periods the minor discomfort is better than fussing with glasses when trying to be active out in the sun.

3. And I’m whispering this because I don’t want the vengeful gods of childcare smiting me, but *we hired a nanny for the summer. It’s going well.* I hope to have a report — a glowing, positive report — at the end of the summer. Please cross your fingers for us.

4. I suddenly find myself with an extra hour with my kids at the end of the day! I’m not always sure what to do with that time! Suggestions welcome!

5. Speaking of suggestions, I’m a little over my favorite Internet news/opinon site (Slate for those of you following along). They’ve kind of turned away from the kind of news analysis I enjoyed (and somewhat relied on) into a lifestyle/lifestyle-critique online magazine. Additionally, they are utterly obsessed with Girls and Mad Men, and I have to avoid those articles like the plague because in the first case I don’t really care and in the second case I haven’t gotten through Season 4 yet. I will always read Slate for the addictive-as-crack advice column Dear Prudie, but I’m kinda burned out on the rest of it. Where/How do you get your Internet news, dear readers? 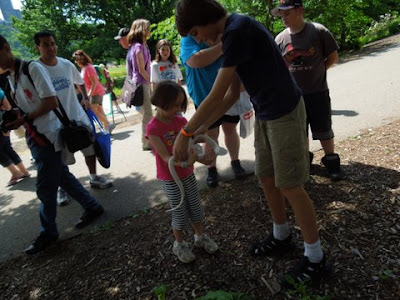 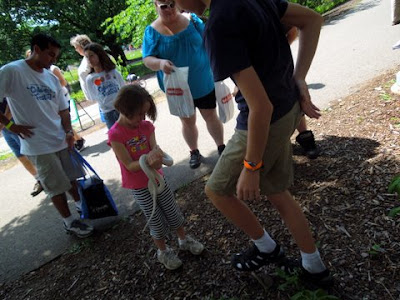 This is Kate at the Venture Outdoors event in Point State Park about a month ago. My mother, who took the pictures, reported that Kate wished the snake had been “more wiggly” because she really wanted it to “crawl up her arms and around her neck” because of course she did.

7. Oh, I might have mentioned to the girls that we could get a pet bunny rabbit. Gotta follow up with a few people about that.

8. Every year, my family — my extended clan — descends on Seven Springs Mountain Resort to vacation. We usually stay with my mother and father, who get a townhouse that sleeps 10-12 people.

Dan and I made the radical decision to get our own place this year. Last year was really difficult getting five of us into two rooms, and Michael had a bad week, waking up every night. Since he slept in a room with Flora and Kate, he was also waking them — and probably my parents too.

Dan went along with the plan (to rent our own place) somewhat reluctantly, but I think it’s going to prove to be a good decision. We’ll find out!

What small changes are going on for you? Or big changes for that matter?