Or leprechauns. Or fairies (except for the Tooth Fairy).

“They aren’t real,” she asserts.

This breaks my heart. First, that she simply doesn’t believe anymore. I know that developmentally, 7 years old is probably a time that doubt starts to creep in anyway. But as an avid new reader of The Magic Treehouse series, I thought she would continue to have faith in the reality of make-believe.

Second, I’m a little worried that someone(s) at school has disabused her of this “nonsense”. She didn’t come to me *asking* if the Easter Bunny was real — she declared outright: “I know the Easter Bunny doesn’t exist.” (We were in Target.)

I have done a couple little tap dances around the subject. Acting surprised, asking, “Are you sure about that?”

But what I am most distressed about is her complete disregard for her sister’s belief.

“The leprechaun messed up the calendar today,” Kate told us yesterday when we picked her up from school. “He left little footprints all over the table, too.”

Flora jumped right in: “Leprechauns aren’t real.” And they proceeded to start to fight about it.

I got them redirected, “Flora, that’s just what *you* think. Look! Daffodils! Those are daddy’s favorite flower.”

But this is something I think I need to address with Flora one way or another.

Part of me wants to continue my current strategy of tap dancing and redirection.

Part of me wants to take Flora aside and explain that while fairies and leprechauns aren’t literally real doesn’t mean that she should spoil the magic for her younger siblings.

Most of me wishes that she still believed the magic herself. 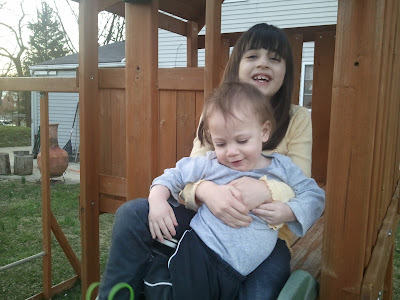 Do your children believe in fairies? What would you do if they suddenly didn’t (or did)?