Lately, Michael has been too cute for color TV (as we say in my house. No idea what it means.)

In the mornings when I go in to get him, we do Eskimo kisses through the crib slats. He (usually) wakes up in a pleasant mood, babbling to himself and then smiling at whomever comes in the room for him.

Dan loves me to bring Michael in our room after he’s been changed, and put him in bed. They play pick-a-boo under the covers, and he will kiss his daddy upon request. It’s adorable.

When he gives “five”, if you hold your hand up for a “high five”, he’ll head butt it.

One evening, he was all bathed and ready for bed. He was patiently standing in the kitchen as I made his bedtime bottle. I handed it to him (intending to scoop him up after I put the milk away), and he looked up at me and said, “dankoo.” (Thank you.) I melted into a puddle on the floor.

Another night, Flora came up the stairs as I was getting Michael ready for bed. Michael spotted her from his bedroom. I had just gotten a clean diaper on him, and was getting his pajamas. Flora started acting like a “monster” coming to get him. He started jumping (as much as a 14-month-old can jump), squealing, and laughing. He was turning in circles trying to figure out where to go.

First he ran to me. And I hugged and hugged him. I let him go to see what would happen next. He kept squealing and turning around and around as Flora came closer. Then he dropped down to his hands and knees and scooted under the guest bed. Flora and I cracked up. He kept peeking out from under the bed skirt, and I could hear him laughing under there.

He has been such a joy to our family, I can’t believe he was ever a question. I am fascinated watching him. He loves to do stuff with his hands. He’s already figuring out the buckle in his high chair. He will sit on the floor with these metal kitchen bowls and stack and unstack them over and over again. He eats well, and he’s sleeping well, although I know that latter can change in an instant. The ladies at daycare tell me what a pleasant boy he is.

And I believe them. He is incredibly pleasant. He’s learning to communicate (can sign “more” and “all done” regularly); he plays independently at times. He usually has smiles and hugs for everyone (except for my poor babysitter. He bursts into tears when she shows up. He gets over it, but it’s a little heartbreaking.)

Love, ya, buddy. Keep up the good work. 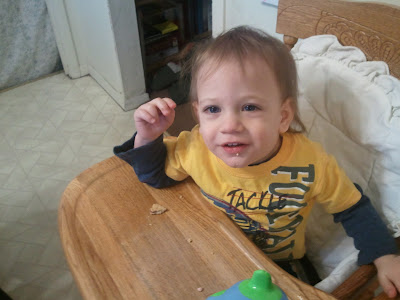