My ILs spent Sunday cleaning out Nanny’s room. That was a tough day. A few of us picked some things that we wanted to keep as mementoes. Dan and I choose some jewelry pieces that we could pass down to the girls. It was emotional.

My SIL and I also picked a couple of items of clothing — a comfy flannel shirt, for example, a sweater. Is it weird or morbid to wear things that once belonged to a now deceased person? Nonetheless, Nanny had some pretty clothes, most of which are going to be donated in any case.

Michael is teething, which has been hell on my sleep lately. He’s been waking up so often at night, and sometimes binky replacement therapy hasn’t worked. Maybe he’s going through a growth spurt, too, because he often wants a bottle at 3:30 a.m. I’m feeling a little rough around the edges.

Michael is also turning over consistently, back to front; reaching for things — and immediately putting them in his mouth. Exhibit A: 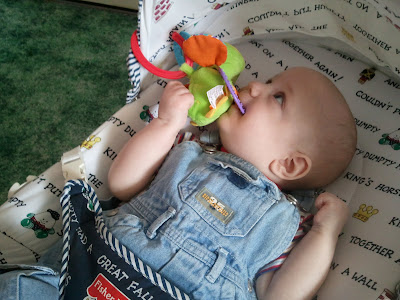 His ringworm is not improving at all — in fact, Dr. Bro doesn’t think it is ringworm. He wants me to bring Michael to the office to do a scraping and test it. Which sounds just lovely. My DCL is freaking out about it, too. Honestly, if I thought I could get FMLA time for it, I’d just stay home with him until it cleared up. (HA! Like that’s going to happen.)

Because he is teething, I finally handed over the famous (or infamous, depending on your point of view) Sophie. And now Michael spends much of this time like this: 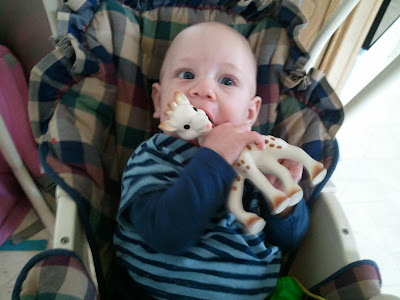 And trying to figure out where that squeaking is coming from.

Dan and I made a major push on our front room this weekend. It started when someone gave Dan a high-definition television two weeks ago. It’s a 40-inch behemoth of a TV, but it does have a pretty picture. So we retired our little (32-inch) TV and its stand, appropriated a stand from Dan’s cousin R, tossed a section of our sectional couch, and bought a DVD shelf (finally!). I would not be embarrassed to have someone visit us now. As long as the front room is the only thing they saw. (The kitchen is clean — including the kitchen table — but the floor needs to be mopped, and, really, our kitchen is embarrassingly outdated. We desperately need new appliances.)

We also did a ton of laundry this weekend. We still have, like, half a ton left.

Next up house-wise? It’s a toss up between yardwork (horrors) or the upstairs, especially our bedroom. Guess we’ll see what the weather decides to do. But given how hard Dan worked, and how nice the front room looks, I know change is possible!

Now I just have to train everyone to consistently put dirty clothes in hampers, and dirty dishes in the kitchen sink. Wish me luck!

Also, lest we forget, my other kids are cuties, too:

That’s at a Build-a-Bear birthday party, where both girls picked the same bear — and Kate named hers the same thing as Flora. I call them Coconut and Coconuttier (the bears, not the girls). This displeases Kate, but not enough for her to change the bear’s name. So be it!